“Learned astrologers can indicate what may take place in the future.
Only the Creator can say what will definitely happen.”—-Modern Astrology Magazine 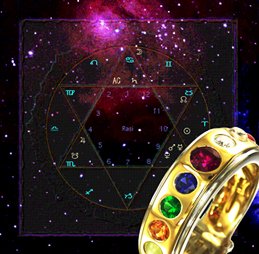 The practice of “Jyotish” (the LIGHT of GOD) or Sidereal astrology has been in continuous use in India for thousands of years and in recent years has become increasingly popular in the West as well. This method gives clear indications about one’s personality and personal proclivities, and also uses predictive methods which are useful for short or long range planning in one’s life. The study of the twelve houses of the Sidereal horoscope reveals one’s destiny in all areas of life. For example, the first house and the Sun in one’s chart will indicate the health of the person. The second house and Jupiter reveal one’s karmic destiny in the area of finances. Similarly, Saturn and Mercury represent one’s profession and business, the ninth house represents religious pursuits, and there are even formulas for understanding the past and future lives of the soul.

The Sidereal or Eastern system of astrology is based on the position of the belt of fixed stars and constellations in the heavens, whereas the Tropical zodiac or the Western astrological system is based upon the position of the Sun in relation to the Earth. The first degree of the Sidereal zodiac is measured from a point 180 degrees opposite the star Spica, whereas the first degree of the Western zodiac occurs when the Sun reaches the position above the equator known as the vernal equinox, on or about the 22nd of March each year.

Originally, the first degree of the zodiac was common to both systems. Due to the peculiarities in the Earth’s orbit, however, the belt of stars and constellations appears to shift in relation to the Tropical zodiac. As a result, the two zodiacs are drifting apart. This is called the “procession of the equinoxes,” and today the difference between the two systems is calculated at about 23 degrees. Thus, if a person is born on January 1, he will have the Sun in Capricorn according to the Western system, but according to the Sidereal system the Sun will be at approximately 16 degrees Sagittarius.

By practical experience, and in light of the advice of the great sages of India, the use of the Sidereal method is preferable. It is mathematically more correct, and it also penetrates into the subtle elements of nature, such as mind, intellect, and spirit to present a more complete picture of our soul’s sojourn in the realm of time and space.

The Sidereal astrological system notes the strengths and weaknesses that a person will experience in life, and also recommends remedial measures for improving our future. The karma or destiny which we are born with has been accrued by pious and impious activities in previous births. The spiritual astrology of India opines that karma is not eternal and can be changed. There are several ways to strengthen our planetary karma.

The easiest method is to wear gemstones which attract the pure vibrations of the planets. According to a person’s birth chart gems can be recommended to counteract negative influences, strengthen auspicious planets, or, according to a person’s particular desire, a gem may be worn to help fulfill a certain ambition. A good astrologer should be consulted for particulars.