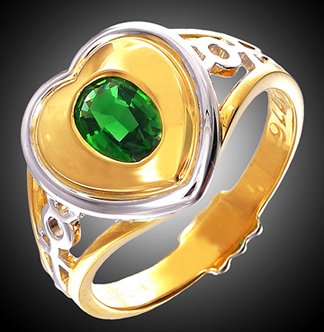 “Pure, flawless gems have auspicious powers which can protect one from demons, snakes, poisons, diseases, sinful reactions, and other dangers, while flawed stones have the opposite effect.”

“A gem free from all impurities and radiating its characteristic internal luster should be looked upon as an escort of good luck. A gem which is cracked, fissured, devoid of luster, or appearing rough or sandy, should not be used at all.”

That gems have powers that can effect one’s life for better or worse is stated in the above quotes as well many chapters of the Sri Garuda Puranam, such as the following quote on rubies by Sri Suta Goswami, “A ruby, although genuine, should not be worn if it has strong color banding, excessive inclusions within like numerous internal cracks, a sandy appearance, a rough surface, or is dull and lusterless. Anyone using such a flawed ruby, even out of ignorance, will suffer from disease, or loss of fortune.”

Gemstones are the Earth’s natural conduit for piezoelectric energy waves radiated from the Nine planets recognized by the Vedic science of “sidereal” astrology. It is both common sense and the traditional Vedic recommendation that only “clean” gems will receive and transmit “undisturbed” astral energy waves

Since there were no microscopes to detect flaws in those ancient times, clean to them meant eye-clean.

At present, the gem trade has lost much of its integrity because of the widespread treatment of natural gems to conceal or change imperfections. The oiling of flawed emeralds as a routine procedure is an obvious example of such treatment. The oil enters the gem through internal cracks which break the surface of the stone. After a period of time the oil drys and the flaws are again visible.

A clean and auspicious emerald cannot be oiled because it has no internal cracks breaking the surface. There is no way for oil or anything to enter into a fine, ‘intact’ non-cracked “single unit” gem crystal of auspicious health.

Flawed gems are far less beautiful and can be a source of misfortune. Most people will not buy torn clothes or a new car with obvious defects. Almost no one uses cracked eyeglasses. Isn’t it odd that almost everyone uses flawed gems?

A good way to think about gem clarity is to mentally compare the location and seriousness of flaws in a gem to similar defects in your own body. If there are minimal flaws in either a gem or your body, there is life and power. But if the defects are too severe, there is neither life nor power. Vedic texts state clearly that only “amala,” CLEAN gems are acceptable for use by thoughtful humans.

Beside the Navaratana, or 9 primary gems, there are many other natural gemstone choices based on color. If one cannot afford the cost of a clean precious gem, one can choose an upa-ratna, or secondary gem. For example: Instead of selecting emerald for the planet Mercury (Budha-graha), one can also use tsavorite (green grossularite), chrome-green or green tourmaline, chrome-green or green diopside, green peridot or green jade. Jade, being an “aggregate” (made up of tiny crystals all fused together) is less preferable thanthe other Mercury gems which are “single unit” crystals.

What is the difference between Jyotish quality gems and commercial junk stones???

There ARE eye-clean, beautiful unburned precious gems on this planet, but they are scarce and costly. Rather than select a flawed primary gem, it is far wiser to choose a flawless upa-ratna, or secondary gem. These upa-ratnas are less expensive than their precious counterparts, and yet conduct the same astral energy of their associated planet. They are also easier to find without flaws or treatment.

See below fora list of all natural gems and their associated planets:

REMEMBER Whatever gem(s) you use should be flawless, because according to ancient Vedic wisdom only “eye-clean” gems are helpful and attractive, while visibly flawed gems are defective and disturbing!