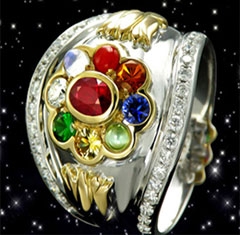 The above Navaratna pendant with 9 flawless gems was designed and created by Richard S. Brown for Astral Gemstone Talismans

(The great sage) Sri Suta Goswami, has spoken the following words in the ancient Garuda-puranam, chap 70, regarding the dawn of creation: 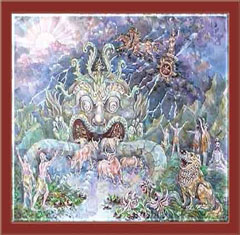 “The blood of the great demon Vala was taken by Surya, the Sungod, who then fled into the blue vastness of space….Ravana attempted to block Surya’s flight like a solar eclipse….Appearing afraid of Ravana, the Sungod dropped the demon’s blood, which fell down in the deep pools of ancient Bharata (which included Burma, Siam, India, and of course Sri Lanka)….Beautiful and effulgent rubies, in all shades of color, possessing manifold virtues, originated on these shores….The rubies from these fragrant lands are found in a variety of hues….Some are like human blood, etc…..Being illuminated by rays of the Sun, this crystal species shines forth with wonderful color and brilliancy.”

NOTE: That is a direct bona fide Vedic link between Surya (Sun) and rubies.

In chapter 69 it is further stated by Suta Goswami:

“The teeth of the demon Vala….fell like stars into the oceans below and became seeds for a species of gems with the luster of full Moon beams. Entering into the shells of oysters these seeds became (natural) pearls.”

NOTE: Another direct link that matches the nine planets (Graha-devas) with associated gems, viz., natural pearl for Chandra, the Moon.

There are nine foremost gems which are known as the Nava-ratna. This quote attributed to the Sanskrit “Brihat Jatak” or Vast Production, reads as follows:

A slightly different version of this ancient Sanskrit verse is also quoted in the “Mani-mala” page 575, verse 79 by S. M. Tagore (1879), and also in the ancient “Jataka Parijata,” chap. 2, sloka 21 compiled by Sri Vaidyanatha Dikshitar (son of Venkata-dhari), and reads in Sanskrit as follows:

In this important sloka the words, “sujatyam-amalam” (sujati=high born, and amala=completely pure or flawless) are very significant. According to bona fide Vedic authority only clean top quality gems are considered to be auspicious.

To further support this important yet mostly over-looked dictate I will quote the following slokas:

“Pure, flawless gems have auspicious powers which can protect one from demons, snakes, poisons, diseases, sinful reactions, and other dangers, while flawed stones have the opposite affect.”

“A gem free from all impurities and radiating its characteristic internal luster should be looked upon as an escort of good luck;A gem which is cracked, fissured, devoid of luster, or appearing rough or sandy, should not be used at all.”

This point is also made in many chapters of Sri Garuda Puranam, such as this quote on rubies by Sri Suta Goswami,

“A ruby, although genuine, should not be worn if it has strong color banding, excessive inclusions within like numerous internal cracks, a sandy appearance, a rough surface, or is dull and lusterless. Anyone using such a flawed ruby, even out of ignorance, will suffer from disease, or loss of fortune.”

All these nine gems are considered equally sacred, and they only differ according to the astral influence of their ruling planets. In essence the table of Asian Birth Stones is as follows: 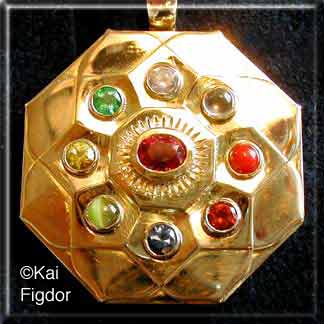 * According to the ancient science of Asian “Sidereal” Astrology, Rahu and Ketu do not rule any of the 12 zodiac signs. Being aprakasha or “shadow planets,” they reflect the qualities of the lord of the sign they occupy. Example: If Rahu is located in Virgo, a sign ruled by Mercury, you should look to the position of Mercury in the chart and predict similar results for Rahu. 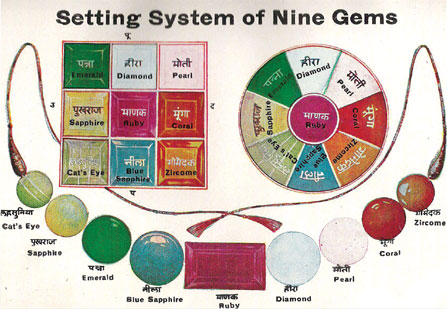