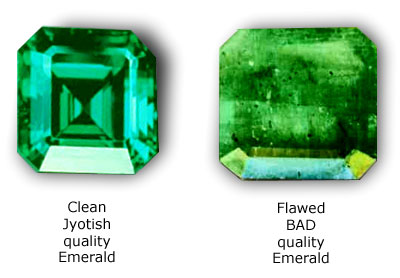 ANSWER:The subject of exactly how to judge the goodness or badness or even falseness of a supposed gem is an elite science called Gemology. And it takes years to be able to identify any supposed gem as to what it is, and years more to judge quality.

If an unknown green stone-looking “thing” is given to a gemologist then he begins the process of elimination, it’s NOT this, it’s NOT that, so it must be “beryl”. And green beryl is called as a gem, Emerald, when it is transparent. If it’s opaque then it cannot be called as emerald (even if green color) because emerald is the elite variety of GREEN BERYL that is a clear crystal. The lower qualities are “industrial” quality or “bluff stones”. So what to speak of quality, a layman looks at a green stone and has no idea what it even is. Therefore the need of Gemologists, just like doctors. Otherwise a piece of green glass or a synthetic can be passed off as genuine. And some people actually use such bogus things and think that is “Planetary Gemology”.

The only thing that is in the favor of synthetics or glass is that they are NOT harmful. Likewise they are NOT useful. They are an illusion. But after all they are harmless. Burned stones are also said to have no effect, according to one researcher, and so again they would be “harmless.”

That is not the case with genuine natural gems. And a gem is, by definition, a naturally occurring object. In case of genuine gem there are four quality considerations. Called the 4 Cs. Viz., COLOR, CUT, CARAT WEIGHT & CLARITY…

—Color is a description of the primary hue of a gem when viewed in indirect sunlight.

—Cut describes the external shape and style of a gem’s cutting and polishing.

—Clarity describes the extent to which a gem is free of flaws when viewed through 10x magnification (10x loupe) in dark field illumination. The clarity grade for “Jyotish quality” is expressed as a percentage of purity on a scale from 100% clean (0% flawed) to 0% clean (100% flawed).

60% to 100% “flawed” means an industrial ROCK. Totally useless for Jyotish, but more than useless it is deemed HARMFUL for human use.

Thus it is stated about emeralds from Sri Garuda Puranam:

(excerpt: “Ancient Indian Gemologists have given the highest praise to emerald possessing the following qualities: display a rich, even color; emit a soft glow; appear to glisten with gold dust inside; devoid of any serious internal or external blemishes. The gem also should be properly cut so that maximum light is refracted to the eye of one viewing it face up.”

“Emeralds considered inauspicious are blackish, devoid of luster, appearing dirty inside or dried and brittle. Anyone concerned with their own well-being should never purchase or wear any oiled, dyed, or treated emerald. Also, emeralds of mixed colors are strictly forbidden.”

—To simplify the matter, lets take an example… If you shine a penlight through an emerald, and it is crystal clear with no visible flaws… so lets call that one “healthy”. And in the case you see small minor flaws, like 20%, then that is “diseased” And if you see totally flawed then that one is “dead” — just like you would be if your body had that much % of flaws.

If you can see 15-20% visible flaws with the naked eye then, when viewed under 10x magnification it will be “heavily flawed”. And the clarity grading is done using 10x loupe or scope.

The safe clarity range is “eye clean” to “loupe clean” (when the stone is viewed with a penlight shining through. If the light won’t even pass through, then it is like a “brick.” And if the stone is only “translucent” (not crystal clear) then again it is junk. As stated by Sri Suta Goswami, “A ruby, although genuine, should not be worn if it has strong color banding, excessive inclusions within like numerous internal cracks, a sandy appearance, a rough surface, or is dull and lusterless. Anyone using such a flawed ruby, even out of ignorance, will suffer from disease, or loss of fortune.” —Sri Garuda Puranam: Chap. 70 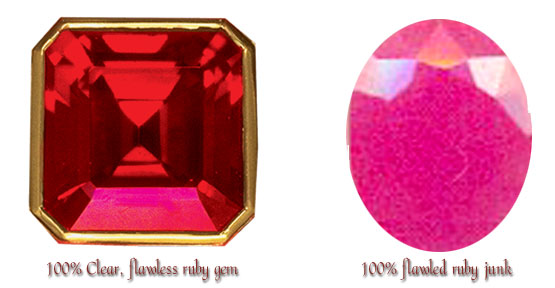 As Shastra says so many times about “clarity’ or quality, so we know that is a must. Any so-called testing done using bad quality stones should be deemed as bad research.